Have You Listened To Civil War Or Stood Across From Hezbollah? I Just Did.

I’m standing on a cliff overlooking Syria listening to what sounds like a thunderstorm, but what is really civil war.

Later, I find myself standing at an Israeli vineyard, 300 metres away from a Hezbollah terrorist outpost on the Lebanese border.
​
The next thing I know, I’m in a hospital – but not because of the terrorists. (If they got their hands on me I’d be lucky to get to a hospital.) I’m actually at Wolfson Medical Center, overlooking a Gazan with a breathing tube down his throat – a Palestinian baby who was just saved by a team of Israelis from Save A Child’s Heart. 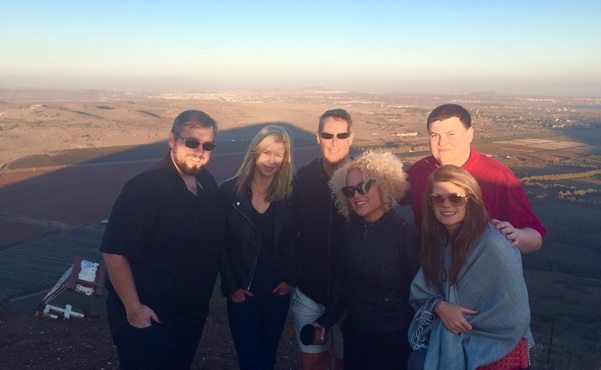 My journalist friends L-R: Syndicated columnist Don Peat, TV producer Anna Wallner, CIJA rep Jordan Kerbl, radio talk show host from AM980 in London Andrew Lawton, syndicated columnist Candice Malcolm.
All of this is the reality of Israel. A reality I’ve been observing and experiencing the past few days while on a media mission, along with four other journalists who were chosen by CIJA. (You can come along for the ride by reading Part One and Part Two of my experiences.)

I never stopped to imagine what civil war sounds like, but it stopped me in my tracks when I heard it.

It is the everyday reality for people in Syria, which borders the Golan Heights in Northern Israel.

So there I was, standing atop a plateaued mountain, talking to an IDF official in Northern Command, intermittently interrupted by the sounds of bombs or rockets or whatever people were using to kill each other or protect themselves from being killed. There were no barriers between us and the 50 different rebel groups – including al Qaida and at least one that has sworn allegiance to ISIS – except for a few hundred metres of land and a small fence.

​These groups haven’t yet directed their efforts at the state of Israel, but things can change at any given moment. Of course, some terrorists have come to the border to harm Israeli soldiers or border towns, but Israel is clear: it does not want any part of civil war. At the same time, it remains on high alert and says it will not tolerate targetting of its people.

Israel doesn’t accept the targetting of the innocent people of Syria either. Just a short distance away from where I’m standing, sick or injured Syrians walk over to the fence and present themselves to the IDF. If these civilians need medical attention, Israel offers it to them. There’s a field hospital at the border that has so far treated 2000 Syrians. Should they need more help, the IDF will transfer them to a hospital and won’t send them home until they have recuperated.

Right across from us is Mt. Hermon – the “eyes of Israel” and its only ski resort. Below it you’ll find wineries and agriculture and 40,000 residents in the area, including many Druze. A country that flourishes in unexpected ways, constantly expecting the unexpected. So, here’s unexpected for you …

The unexpected part of my trip to this orchard/vineyard, was when I was told to look 300 metres in the distance at the Lebanese border, where a Hezbollah terrorist outpost stood. HEZBOLLAH. A Jewish girl standing 300 metres away from Hezbollah, a terrorist organization that aims to annihilate Israel and Jews (and isn’t necessarily upstanding with its own people either). Now imagine the people who live and work on this fruit-producing Kibbutz, directly below this terrorist outpost – WITHOUT any barriers between them. To think these Kibbutzniks and workers thrive. And to think they are more concerned about the world’s food security than their personal security, growing more food with less resources. In fact, it is speculated that we’ll run low on chocolate in 10 years because of a cacao bean shortage – and perhaps because of my love for chocolate cake. It is also speculated that Israel’s irrigation technology could ultimately save the cacao beans. (I say we toast to this with chocolate cake!)

A couple hours south, I’m far removed from Hezbollah (well as far as anyone can be in a country the size of New Jersey), and I’m standing in a new reality, where children are being given new life. Just a few minutes south of Tel Aviv, in Holon, is Wolfson Medical Center, where for the past 20 years a team of volunteer medical professionals has saved over 4000 children. One in 100 children are born with congenital heart defects, and many won’t live to see their first birthday. Some kids’ hearts fail from something as simple as untreated strep throat. Save A Child’s Heart is on a mission to save as many kids as possible. Half of these children come from Israel, the other half includes children from Gaza, West Bank, Syria and many African countries. Walk through the ward and you’ll see little Israeli children in beds next to Palestinian children in beds next to Syrian children. A child is a child is a child.

This afternoon I met children who two weeks ago were dying and today they were outrunning us. Elijah (pictured below) gets to go back to Ethiopia soon. Two weeks ago he was dying. Today, the six-year-old outran, outplayed, and maybe even embarrassed my new bud, Andrew from Corus Radio in London. (Okay, to be fair, it was the other journalists and I who embarrassed Andrew for getting schooled by a child at a child’s game.)

So from civil war at a border lined with terror, to an industry thriving where you’d think they’d just worry about surviving, to saving children who come from behind what you may call enemy lines, Israel is not what you’d expect.

And I must say, I really appreciate the many messages you keep sending … asking about my safety, wishing me a safe return, and generally showing me how much you care. Thank you for that. Just remember, while I’m safe, and plan to stay that way (reason #1836 I didn’t walk the 300 metres to get clear pictures of Hezbollah’s terrorist site), I will be heading back to the safety of Canada soon. Over 8 million others will remain here – and apparently they too are worried about safety – others’ safety.

I really didn’t mean to get so serious with this blog. Maybe it’s because it’s so late and I have so little sleep. Maybe it’s because the events of the past few days have been so sobering. Or maybe it’s because I only had two bites of chocolate cake at supper. (I’ve got to stop eating so much hummus so I can leave more room.)
​
Shalom for now.
dahlia