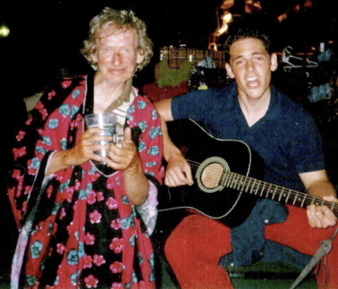 Southside hanging out with a busker.
At one time he owned more than 100 homes. Now he does not even have one.

John Buchan is an intelligent and intriguing man with a formidable past. The grandson of Canada’s 15th governor general of the same name, is known to his friends as Southside Johnny. He has been homeless for almost 13 years, roaming around town with his shopping cart.

Last year, Claudette Bradshaw, the federal minister responsible for the homeless file, responded to a mounting homeless crisis in Canada and said “no Canadian has to go hungry or be without a roof over their heads.”

Well, Southside would love to show her Main Street.

“Life is a piece of crap on Main. If Winnipeg were to get an enema it would be on Main, because it is the asshole of the city,” says Southside.

The Federation of Canadian Municipalities estimates that for every homeless person in Canada, there are four families at risk of becoming homeless.

Southside’s story may be the story of one homeless man, but its history proves it can one day be your story too.

In the seventies and eighties, Southside was a strong financial supporter of many charitable organizations, including the Main Street Project. Nobody could have predicted that a top real estate agent in Winnipeg, who volunteered his time to teach religious Catholic studies to children, would one day become the Project’s best client.

Once a clean-cut and stylish man, Southside now has an image that may disgust people. Straggles of his silver hair slip onto his sore-filled face and his meagre 63-year-old body reeks of urine.

Donna Gabbs, a former colleague of Southside, remembers him 100 pounds ago when they were competing agents. She says he had entered the industry in 1980 when the Winnipeg Real Estate Board ranked him last in sales, among a field of over 2400 agents. One year later he was 13th.

Things began to fall apart for Southside in the late eighties. With over $1.5 million invested in real estate, Canada’s continuously hiked interest rates proved devastating for him, as he was forced to re-finance to the point where he eventually lost everything.

Gabbs remembers that on the day Southside discovered his home had been repossessed, his boss fired him and his girlfriend ran off with his best friend and thousands of dollars belonging to Southside.

“I just about died when I heard that he was homeless,” said Gabbs. “He doesn’t deserve this.”

“I will see John from time to time and help him out – buy him lunch – but I won’t give him money for alcohol.”

Southside is an alcoholic, but he will be the first to point out that he does not abuse alcohol; rather, he misuses it while it abuses him.

Despite his condition, former friends and colleagues are in awe of his acute memory. Even Gabbs admits that Southside’s memory is better than hers. She is amazed at how he recalls things from over 20 years ago, right down to the smallest details.

Southside does remember details. He can recount the lives of Mozart, James Joyce, F. Scott Fitzgerald and many others. And from Bob Dylan to UB40 to Steely Dan it seems like he knows every word to every popular song ever written. Southside’s knowledge, unlike his fortunes, seems like something he can never lose.

Long lost however, is Southside’s relationship with his daughter and two sons. It has been years since he has seen any of his children, who their mother, Carol Buchan, says no longer can handle being associated with their father.

Carol and Southside divorced before he became a successful real estate agent. Though she is his ex-wife, Carol is the one the police call when there is a problem with him.

“He still comes by the house sometimes with his cart and all its amenities and will ask me to microwave a loaf of stale bread or something,” says Carol.

Southside is the MacGyver of the streets. His cart stocks everything from food to survival gadgets. If you need something either it is in the cart, or he will get it for you.

Out of fruit cocktail? Go see Southside. He has a family-size jar of it. Craving potato chips? Well, wait a couple of minutes and he will return with a bag for you and one for your friend. And hey, burn off those extra calories by exercising. Southside can provide you with a skipping rope, no problem.

One thing he cannot find is safety. He hates what he has to endure every night, because the streets of Winnipeg are not safe.

The city is indeed unsafe, and not only at night. After witnessing many serious assaults and being victim to several in washrooms of downtown establishments, Southside is afraid to use toilets. Often, he will urinate in his pants, because as he says, you are most vulnerable with your pants down.

For a man like Southside, friends are hard to come by. His status and appearance can deter people, but given a chance his intrigue can attract them. Which is exactly what happened on the happiest day of Southside’s life at the 2000 Winnipeg Fringe Festival.

Fascinated by the musical stylings of a busker, Southside approached him to discuss music. As the busker spoke with him, people suddenly saw Southside differently. Later that night, he was accompanied to the Fringe wrap-up party by his newfound friends, where they bought him 12 rye and cokes. When Southside awakened the next morning, there was a $5 bill in his pocket.

During all his years as a prominent real estate agent, he never felt so happy. “For someone who hadn’t been acknowledged or respected in years, getting so much respect in one night was incredible. People saw me and listened to me.”

Who knows where Southside will sleep tonight. Life on the streets is unpredictable, but that is what keeps him going. “I’ve met so many amazing people who I’d never have met had I lived in the typical house on a hill.”

Maybe Southside is finally home.
Tweet
Back to Portfolio