​It’s after midnight and I’m sitting in my hotel room in Jerusalem. I just spent the night with a group of Canadian journalists and a man who at one time shared hotel trips and political information with Israel’s current prime minister – Benjamin Netanyahu. After an evening of Moroccan food filled with its savoury cinnamon trademark, I went out walking on my own for a bit before I came back to the hotel. My brother (among others) warned me not to go off on my own in Israel’s capital, given the recent terror attacks in Jerusalem, but I am my brother’s sister, and have his stubborn independence, so of course didn’t listen. 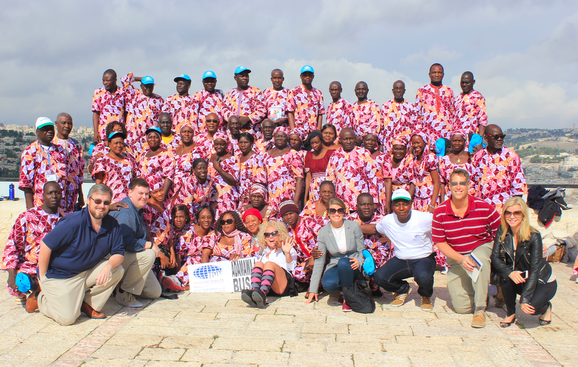 My journalists friends with our new friends - a group of pilgrims from Nigeria in Jerusalem.
​I’m in Israel on a media mission with CIJA (The Centre For Jewish and Israeli Affairs). I was chosen, along with four other – may I say well respected journalists – to spend time with Jewish Israeli, Arab Israeli and Palestinian experts and officials, to get a view of this New Jersey sized country from varying perspectives.

We arrived Sunday, and now it’s Tuesday at 12:32am, so it’s kind of still Monday, and really still Monday in Winnipeg, but given my jetlag and lack of sleep, it may as well be Jaifmfyabday, because I’m probably not making much sense. So I’ll quickly tell you about a couple of things from today, then catch you up more tomorrow, or AJfidkapday, as I’m calling it now.

So today we met with a high-profile Palestinian TV talk show celebrity, Maher Shalabi, host of “Transparent.” He’s interviewed everyone from President Bill Clinton to Prime Minister Netanyahu, but I can’t divulge our conversation today, since it was off the record. That said, I can tell you about my conversation with Avi Melamed, former senior Arab Affairs Advisor to Jerusalem – he was the head of intelligence and security for the municipality.

Now I told you how my brother doesn’t want me out alone – and I have been advised not to run outside in Jerusalem – especially because I’d be wearing headphones and wouldn’t be as alert. Avi didn’t tell me not to run, but he did talk about the current run at terror – which is why I’m not running.

Avi says it’s called The Intifada of the Knives, a wave of terror that’s finding Jerusalemites getting stabbed or run over by cars. There was a terror attack just the other day when a couple of people were stabbed and another where a few people were run over. He says it’s hard to say when it will end, because “once a tiger is out of its cage, it’s hard to stop it.” And Avi thinks social media is keeping the tiger – and tigers – going.
But Jerusalem is a vibrant city of many peoples from many backgrounds: Jewish, Muslim, Christian, Armenian and more. People on every side are now paying a price. Still they continue functioning, perhaps with some daily life modifications though. I heard a quote here, “It’s a city full of hope and happiness, but you need to write a will before you leave your house.”

That said, I’ve left my hotel many times today, and I don’t have a will. And I felt safe. And I’m safely writing you this note from my JeROOMsalem right now. Though you’re apparently not safe from my bad word plays. Which probably mean I should get ready for bed, since I have to be up, practically yesterday.

Oh, before I go … That picture above? That was taken at a Jerusalem lookout after our chat with Avi. My journalist friends and I met a group of pilgrims from Nigeria. The pilgrimage has very little money, but work very hard saving their money for awhile to take an organized tour to the Holy Land. They all buy the same material for their clothes, and each person gets to design his or her outfit however they want. The people in the photo are just one part of their group, because there’s no way their whole group could fit in the picture. There were so many of them, I’m surprised they could all fit into this tiny country. But they were probably the happiest group of people I have ever met.

So remind me to tell you about the future of vaping, Canada’s hero, Sergeant At Arms Kevin Vickers and his ties to CIJA, and a question that got everyone talking in the Palestinian community that would never fly in Winnipeg … And remind me to tell you about so much more, because have I got stories for you. And many more pictures (which apparently each tell 1000-word stories). But for now, I have to be up in a few hours, and I’m many hours behind. So happy Monday or Faifjday, because who really knows what day it is.
​
Shalom.
dahlia