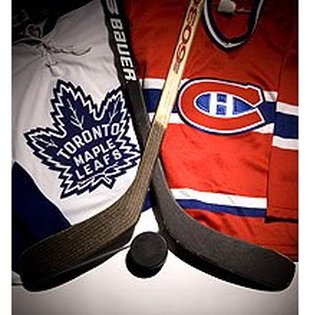 There is a rivalry in sport that transcends skill, athleticism, intelligence, fair play, and even maturity.

It is the rivalry between Habs fans and Leafs fans.

To be fair, I will admit I am fan of the bleu, blanc, et rouge. I’m sorry. I can’t help it. It just happened. I was born.

I’ve heard it argued that the latest surge in fandom rivalry stems from the late 60s when Montreal lost its title as Canada’s wealth and commerce capital to Toronto. But to many Canadians, Toronto has always seemed to position itself as the centre of Canada - and the universe - so that probably never changed anything.

Some explain the rivalry between Montreal and Toronto to be symbolic and rooted in the history of the French- and English-Canadian debate, along with all the politics and religion attached to it. But these days, the Montreal Canadiens are the only thing that devout separatists and Anglophones of all race, creed, and colour can agree upon.

In fact, the Habs pioneered the use of “O’ Canada” at the Montreal Forum (the Bloc Québécois’ favourite song).

Perhaps there is some merit to the theory, and the beginnings of the rivalry. Still, what continues to fuel this rivalry has nothing to do with the Plains of Abraham or even poutine.

From 1944 to 1978 the two teams met 12 times in the playoffs, and faced off five times for Sir Stanley. During all the years of their existence, both the Habs and Leafs have gone through many changes.

So how can you hate a particular team when it changes with time? Players move on. Just look at Judas Komisarek. Or “Et Tu” Brute Gil.

Can it be the uniform? Is that what fans cheer for, or jeer against? If that were the case, no one would like the Wild – except the blind.

Some say they hate the Leafs because of the way the national media covers (favours) them. A lot of Canadians – not just Canadiens – have a dislike for the Leafs. And perhaps it is partially a backlash against media outlets such as the CBC and TSN, which seem to represent Toronto as “Canada.” (Thank goodness for RDS. Thank Rogers for making RDS an expensive add-on.)

Recently, I was at a funeral – in Toronto. The Priest, in the middle of his address, asked the deceased’s family if it was true that all her life she had been a die-hard Leafs’ fan. They confirmed this to be true. “Then she must have been a woman of faith,” the Priest ascertained.

A Toronto fan recently told me that he wants the Habs to lose more than he wants the Leafs to win. Clearly he doesn’t understand the basis of Karma. (Maybe it’s the fault of people like him that the Leafs haven’t even made the playoffs since 2004.)

The other week, a Montreal fan professed to me that he hates the Leafs so much he feels he should seek professional help.

But alas, he’d have to get in line behind the entire Maple Leafs team, who probably, at this point, need it more than he does.

As much as Canadiens fans can hate the Leafs, they can hate their own team more than a team they profess to hate. Just look how Carey Price received more boos than Jim Balsillie would in a room full of Phoenix Coyotes defenders - all 1500 of them.

As for the Leafs, well, I can’t hate the players, some have no choice whether or not they play there. (It doesn’t matter where Sean Avery plays though, my mind won’t change about him.) To say I hate Toronto as a team is too strong a statement. As a fellow Montreal fan best expressed: I enjoy when the Habs beat them, and rubbing it in the faces of Leafs fans and management.

In the end, it’s a rivalry – that may be linked to some socio-political forces – but for me, and some other Habs fans, the dislike could be more with the city, and the Leafs’ philosophy, and less with the team and its players.

Historically, Toronto has been a team that fought, hooked, tripped, bullied, and intimidated other teams. The team’s philosophical base seems an extension of its founding father Conn Smythe. Today, despite all the Leafs’ “changes,” they still have a team based less on finesse, and even have a line dubbed the “Bay Street Bullies.” Conversely, Montreal has typically been a team of skill, speed and finesse. More of a classy team.

As a Canadiens supporter, I’ve always thought it was an innate feeling to hate Toronto, likewise for Toronto supporters hating Montreal. I thought this until recently, when I heard of some guy who actually cheers for both teams. It is quite possible this man could broker some sort of world peace.

Then again, his identity was never revealed, and I’ve never met him … So I’m guessing Mr. Habby McLeaferton is probably just hanging out with Santa Claus and the Easter Bunny somewhere.

Let’s face it. Neither team is living up to its legacy right now. And it is for that reason that fans of both so steadfastly live in the past and protect their respective teams. It is then we hear Toronto fans say, “Montreal sucks #$%,” and Montreal fans say, “Toronto is the worst NHL team in history.”

I will, however, be the first to point out that Toronto is actually the second best NHL team in history – behind Montreal – THE best team in NHL history.

Again, I’m not a Leafs fans, but if I were a fan of golf and they took to the PGA, I’d be sure to root for a winning team – the Leafs.
Back to Portfolio