​Another Day In Israel, Another Set Of Terrorist Attacks … And Why I’m Not Afraid

​There were three more terrorist stabbings in Jerusalem today – in places I’ve been at or near since arriving here Sunday for my CIJA media mission. My friend in Canada messaged me asking if I still feel safe. Well, despite this wave of terrorism, I walked back to the hotel – alone – as stores were closing and streets were emptying. And despite the big-girl-I’m-unafraid-walk, I did notice me noticing more people. My suspicions were on alert, but I still felt secure. Some may say that’s what life is like for Israelis on a daily basis. Israelis however will probably just say, “Pass the hummus.” Because life goes on … 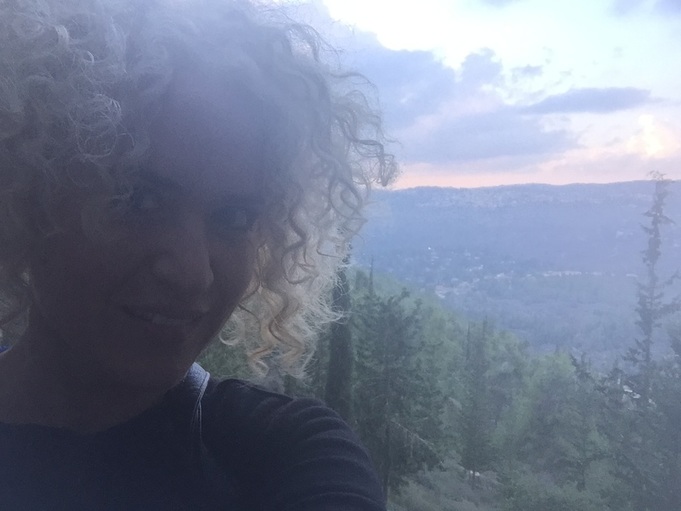 Me at The Holocaust Museum in Jerusalem. This is the lookout, as soon as you walk out from walking through the Museum.
Israelis have lived with a target on their backs – and maps – for decades. Still, that hasn’t stopped them from living productive lives and contributing to the world’s progress. The invention of the mobile phone, Intel chips, voice mail technology, the first anti-virus software, drip irrigation in the desert … The list is endless – and continues with Canada as the countries work together on progressive defence, biotech projects, brain science research and environmental sciences.

I know I told you to remind me to tell you about the future of vaping, Canada’s hero, Sergeant At Arms Kevin Vickers and his ties to CIJA, and a question that got everyone talking in the Palestinian community that would never fly in Winnipeg … But we have to save that for next time, because I have to tell you about today.

1. Remember this name, because she will one day be the main character in a blockbuster movie about her life and how she saved countless Israelis – and possibly Palestinians too: Nitsana Darshan-Leitner. She’s the director of Shurat Hadin – The Israel Law Center. Rather than go to war with terrorists, she’s been going to court suing them – and the banks, organizations and countries supporting them financially, both directly and indirectly. And she’s been winning, preventing millions upon millions of dollars worth of illegal weapons and arsenal from reaching terrorists. If you had the choice of messing with her or a soldier, you’d be wise to choose the soldier – or an entire army for that matter.

2. I went to Yad Vashem today, The Holocaust Museum. Last time I was there, I met a group of Germans, who needed help with translation in the Museum, so I gave them a tour – in German. This time, I was able to walk through and spend time with my own thoughts. Every time I looked at an artifact that belonged to a Jew from the time: a shoe, a thimble, a piece of cutlery, a yellow star … I wondered if that particular item belonged to my bubby or zaidie or any of my family members who were brutally taken. On this, one day before Remembrance Day, you can’t help but to wholeheartedly appreciate the sacrifice of the men and women who fought for our freedom and democracy.

3. We spoke with a high-profile Arab Israeli today, who requested that we not attribute his comments to his name. To be clear, he is a Muslim who is a citizen of Israel. (Arab Israelis make up 20% of the population here.) He has all of the same rights and freedoms as any Jewish Israeli. Palestinians who live in Gaza or the West Bank are not citizens of Israel. So they aren’t afforded the same rights as Israelis. (Talk to either Hamas (if you dare) or President Mahmoud Abbas (who is now serving his 11th year in his 4-year term) about the Palestinians’ rights.) Anyhoo … Here’s what this gentleman explained:

He started by saying, if you’re looking for good news I’m not going to give it to you. And went on to explain that peace talks keep failing because of the Palestinian side for two reasons:

2. No one has courage to tell his people we can accept less than 100%. “If tomorrow Israelis were to offer 99.3% of what the Palestinians ask for, they’d reject it.”

He said he doesn’t see the peace process moving forward in the foreseeable future. Especially because of the lack of education for peace with Israel on the Palestinian and Arab-Muslim side. This conflict is not about money or living conditions or borders or outposts or prisoners; rather, it’s about poisoned hearts and minds of people in the Arab world. He says he’s worried that the majority of Arabs and Muslims don’t see Israel’s right to be in the world. And while he admits that as a minority, he and other Arab Israelis have problems in this country, he still wants to live here. He ended by saying he fears the day will come when we miss Hamas, because there will be groups WORSE than they are.

At the end of our conversation I asked, “Have you always thought this way?”

“Isn’t it only natural?” he answered.

Maybe as natural as me in Jerusalem, walking back to the hotel alone in the dark, late at night – after a day when three more terrorist stabbings took place just a short distance away – and thinking, “I’ll be okay. There’s nothing to worry about.”
​
Shalom for now.
dahlia