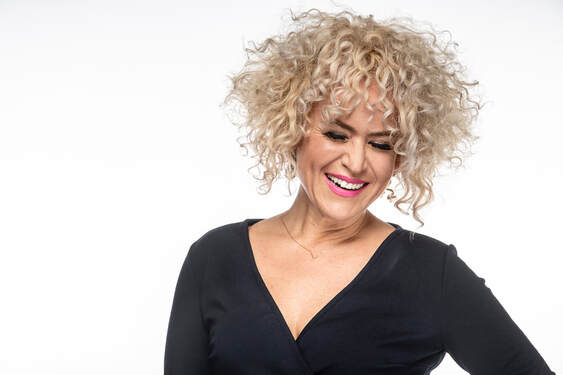 I've had face-to-face conversations with everyone from Nobel Peace Prize winners to Oscar winners to POWs to famous comedians to your next door neighbour who you didn't know was making such a difference.

​And I've given out thousands and thousands of dollars on my talk show throughout the pandemic - money that didn't come from my station, rather from listeners who were moved to help strangers.

I graduated high school extra early. Travelled. Got my BA Honours degree in political science and theatre with a minor in German. Then quickly climbed the corporate ladder and secured a highly desirable job.

I was living the dream - someone else's dream.

​So I quit, and began the nightmare of returning to school. But I couldn't wait to be on radio. And while in school, pitched "Danger Girl" to 99.9 BOB FM.

After a relentless pursuit, the big boss - the program director - calls me in.

PD: "Dahlia, we have a big idea. First, are you afraid of anything?"

ME IN MY HEAD: "I'm afraid of everything."

PD: "Good. Because we plan to submerge you in 10,000 gallons of water. For 48 hours. To broadcast live on-air. Launch the station. And raise money for Sick Kids.”

ME: "Awesome!" (Actually, I have no idea how I replied, because I think I blacked-out inside.)

PD: “Oh, and this will be Danger Girl’s audition." (Good thing I already blacked-out, or the word “audition” would’ve killed me.)

It's the day of the event. A massive tank on a flatbed truck is situated on the parking lot at the city's busiest mall. A crowd has gathered. I put on my full face mask, no other gear, and prepare to enter the 10,000 gallons of death.

Once completely underwater, I go on air - for the first time in my life.

Within the first hour I was swimming around like a mermaid and doing enough flips that my ears were popping (and continued popping for the next month).

In my last year of journalism school, I interned at CBC, hoping to be hired. They told me they "never" hire interns. Then I broke a story about police brutality. And CBC hired an intern.

Soon after, I found myself travelling the world for acting and TV hosting opportunities. As an actor, I felt the pressures of body image. Even when I dropped to 90 pounds I was still told to lose weight.

What? Did they want me to remove a kidney?

Once I returned to Canada, all that nonsense inspired me to create the country's first ever body image awareness program for girls: Bye-Bye, Barbie!.

Then came the country's first nationally syndicated social media column, and my first shot at regularly being published in over 200 Sun Media papers across Canada with #eSaidSheSaid.

I was honoured to be chosen to write the foreword for Woman: An Anthology - an award-winning book that includes authors such as Stephen King and Alice Munro. From thousands of books around the world, it won the Independent Publisher Gold Medal for Book of the Year in New York. (Maybe it's time to promote myself from writer to writest.)

Recently, I've also been included amongst former Secretaries of State, a Nobel Peace Prize Nominee, Noam Chomsky, political leaders, philanthropists, and artists from around the world ... as official supporters of the world's first International Treaty to Ban the Political Use of Religion: BPUR.⠀

But, ultimately, what do I really do? I help make good things happen.

Because I don't have a job. I have a mission.