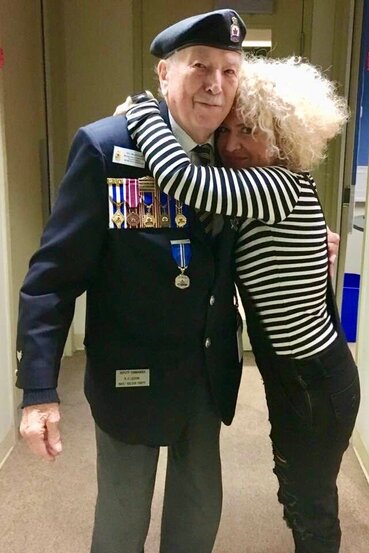 Bill, as he asked me to call him, served as a radar technician. But he spent the rest of his life serving the memory of his comrades. People whose courage and sacrifice ensured our freedom today.

The 95-year-old would stand at the bottom of the escalators at Billings Bridge Shopping Centre for SIX HOURS A DAY pinning poppies on people. His efforts fundraised a record $10,000-plus in about two weeks.

So I say to him, "No one's ever refused a poppy from you."

And then he floored me.

"Yes. And I say to them, 'Why are you refusing a poppy?' And they just walk away. But, generally, they don't know. And they don't get a chance to know what the poppy is. The poppy is remembrance. And that is my theme in life: To remember.

"I had two brothers in the army. I had many friends who were killed. And I want to remember them. And I want everyone to remember. They are all great heroes."

After our on-air conversation that day, Bill and I sat and chatted for a bit. And as he held my held, he held it with more love than I've felt in a very long time. And this was as the widower, spoke about his wife of 73 YEARS, Phyllis. And while we on air, unless you listened closely, you’d never know he was crying the whole time he spoke about his wife.

So, If you want some of the greatest advice for living your best life, listen to what Bill has to say. If you want to honour Bill and his comrades, please, REMEMBER.

By the by, HE DROVE HIMSELF to see me that day.